Ashraf   = honorary, aristocratic, title of the immigrant elite in India, connected to the lineage of Rahmat Khan and connected after his marriage to the daughter of Maulabakhsh to the dynasty of Maulabakhsh
Babuli  = (Tartar) father’s child
Bhaijan = older brother
Bhaiyajan = little brother
Begum  = Indian word for wife. Used in the Sufi Movement as the name for Hazrat Inayat Khan’s wife, Pirani Amina Begum (Ora Ray Baker)
Chhotamiyan  = title, comparable to Squire
Hazrat = (litt. Presence) form of address and title of a holy man, comparable to ‘highness’ or saint usually given after the person has died. Also: Huzur
Jagirdar = Indian aristocratic title for an feudal landlord
Khan = a rank from the old Moghul era. The word has different meanings and usages: (1) caste indication for muslims in India with a military rank, a lower degree, comparable to the English ‘gentleman’ or ‘squire’ (2) Khan-Zamindar, comparable to the European allodial baron or landlord (3) Khan as a general aristocratic title, without further denomination (4) title of a ruler, comparable to Raja, (5) A last name, used in present-day India
Khasette = Arabic term for caste
Malik  = head of a clan
Mamuli  = (tatar) mother’s child
Mashaikh = originally Arabic title, plural of Shaikh, in Persia in later days understood as singular, subsequently used in India as caste denomination, in this context connected to the father of Inayat Khan, Rahmat Khan.
Mahashaikh = Indian variation on Mashaikh, meaning: high or honourable Shaikh
Mullah  = religious scholar within the muslim culture. Nickname for Pir-o-Murshid Ali Kahn
Pathan  = Name for the immigrants from Afghanistan with a military background. The name developed in India to a caste name. The name was adopted by Alaoddin Khan, the uncle of Hazrat Inayat Khan, as a western surname before his trip to England, to help with his application for a passport.
Pawitrapati = pure or holy, honorific name for Maulabakhsh, used by his Brahman pupils
Pir  = (Persian) elder, leader, counsellor
Pirani = wife of the Pir
Pirzade = son of the Pir
Pirzadi = daughter of the Pir
Pyaromir  = Urdu name for (i.e. translation of) Maheboob Khan.
Mir Pyarumiyan = Hindustani name for (i.e. translation of) Maheboob Khan
Rajkufw = royal or high born
Rusa = Russian
Shole = original first name of Maulabakhsh
Sirdar = head of a tribe
Tansen = name of a singer from the Moghul period, granted as an honorific title to Hazrat Inayat Khan by the Nizam (ruler) of Hyderabad
Taya = an uncle, older than your father
Thopezai  = ‘descendants’ i.e. former adherents of the Indian war hero Tantya-Thope (mutiny of 1857).Thopezay later on became a caste name or tribal name.
Youskine  = Indian surname for the family lineage of Sheikh-ul-Masheik Mahmood Khan Youskine. The name has been adopted in 1972 by Mahmood Khan as a family name, connected to his  Dutch naturalization.  Originally: Yuskhan (Horde Khan) the name of settled        nomad tribes from central Asia, that had to flee from the armies of Timur Lenk.
Zamindar = Indian aristocratic title for a feudal landlord

Maternal grandfather of Hazrat Inayat Khan. A famous musician in India. Developed a notation system for the musical style of northern as well as southern India. Founder of the musical academy: Gayanshala in Baroda.

Maternal uncle of Inayat Khan and his brothers. Alladad Pathan was the brother of Inayats mother, Khatidja Biy, and the second son of Maulabax Khan. Dr. Pathan had a great influence on the Khan brothers in the field of Western culture and Western music in particular. For some period het studied in the United Kingdom. He returned with many impressions of Western Society. This fanned the desire in young Inayat to visit the West some day.

Wife of Rahmat Khan and mother of Inayat Khan and his brothers Maheboob and Musharaff. She died at the age of 34. Inayat was by then 20 years of age.

Indian musician and mystic. Brought Sufism to the West and founded the Sufi Movement. For an elaborate biography see: Biography of Pir-o-Murshid Inayat Khan 1979) or the biography by Wil van Beek (1982): ‘Hazrat Inayat Khan, Master of Life, Modern Sufi Mystic’.

Cousin-brother of Hazrat Inayat Khan, leader of the ISM from 1948 to 1958. At the same time active as a traditional Indian healer. Third member of the Sufi-triumvirate of 1910. He lived and worked in The Hague, Suresnes and Geneva. Besides being a Sufi leader he was active and most appreciated as a traditional Indian healer. As a singer he performed the verses of Inayat Khan, set to music by Maheboob Khan. For a short biography see Jironet 2009

Brother of Hazrat Inayat Khan,leader of the Sufi Movement from 1927 to 1948. Maheboob was a composer and arranger in Western harmony of numerous Sufi and Indian songs. (For a short biography please consult: Jironet 2009)

First wife of Musharaff Khan. For a number of years  they lived together in Suresnes at the Rue de l’Avenir. The house was named Villa Inayat. The couple also spent some years in Belgium where they led a Sufi center. She died during a stay in India of the effects of malaria.

First wife of Musharaff Khan. For a number of years  they lived together in Rueil, close to Suresnes, at the Rue de l’Avenir. The house was named Villa Inayat. The couple also spent some years in Belgium where they led a Sufi center. She died during a stay in India of the effects of malaria.

Youngest brother of Hazrat Inayat Khan. Leader of the Sufi Movement from 1958 until his death in 1967. He married Savitri van Rossem du Chattel in the mid twenties. After her passing in 1946 he remarried Shazadi de Koningh in 1948. His memoires have been published in the work ‘Pages in the life of a Sufi’. (For a short biography please consult: Jironet 2009)

American of birth. She met Inayat Khan during his tour in the United States. After Inayat Khan had moved to the United Kingdom in 1912, she joined him in 1913. They got married the same year. She was Inayat’s third wife. The first two Indian spouses had died at a very young age in India. Begum was the mother of Nooronissa, Vilayat, Hidayat and Khairunissa (Claire Harper).

Third wife of Pir-o-Murshid Musharaff Moulamia Khan (after Subhanbi – Savitri van Rossum du Chattel and Zebunnisa Joyce Hiddingh). She led the Banstreet center in The Hague for more than three decades (in the sixties together with her husband). On the fifth of July 1953 she was appointed  Sahaba-e-Safa (Knightess of Purety) by Pir-o-Murshid Ali Khan. During her life she guided numerous mureeds.

Shahzadi is the founder of the Sufi Museum in honor of her deceased husband. That’s why the museum is called Stichting(Foundation) Sufi Museum Pir-o-Murshid Musharaff Khan.

She left her house and all of its objects, her personal archive, books and other historical items she has collected in the course of fifty years to a foundation called The Sufi Museum. This museum is being moved to the Anna Paulownastraat 78 in the course of 2018.

First wife of Hidayat Inayat—Khan. Mother of the sons Fazal en Gayan and the daughter Inayat. Leny was the companion of Fazal Mai Egeling in Suresnes, where she met Hidayat Inayat Khan. Some time after she divorced Hidayat, she moved to The United States (Californië). She always remained a Sufi.

Eldest daughter of Hazrat Inayat Khan. She was a heroin in the resistence in World War II for the allies and was located in Paris. Her codename was ´Madeleine´. In 1944 she was arrested en held hostage in the Dachau concentration camp where she was executed by the Nazi’s. In London in 2014 a monument was erected at  Gordon Square. 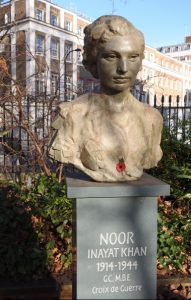 Son of Hazrat Inayat Khan, leader of the Sufi Order International. He was married to the English woman Mary Walls. In a later relation with Jemila Taj Inayat two sons were born, Seraphiël (later Zia) and Cherubil (later Mirza). From the fifties onward Vilayat organised his own retreates in post war Suresnes, even after the Sufi Land (also named the Garden of Allah) was expropriated by the local government. During the sixties he more and more went his own independent way together with his followers, from 1068 onward within the organisation he created named The Sufi Order International. Later on and to the present day the annual Summer School of this organisation was being held in the Zenith Camp, in the mountains of Switserland.

Second son of Hazrat Inayat Khan. Musician (violinist and composer) and mystic. Member of the coöperative leadership council from 1982 to 1993. Pir-o-Murshid of the Sufi Movement from 1993 to 2009. After that he was up until his passing the Co-Representative General of the Sufi Movement together with Karimbakhsh Witteveen. In the eighties he gave an impuls to the development of the Sufi Movement in Canada. For a number of years he led the Summer Camps at Lake o’Hara in cooperation with  Nawab Pasnak and David Murray.

Youngest daughter of Hazrat Inayat Khan. Her memoires, written in cooperation with her son, David Harper, were published in 2011 with the title ‘We Rubies Four’. 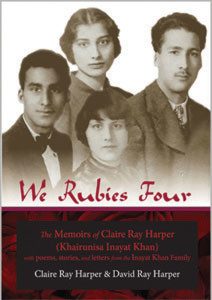 Son of Shaikh-al-Mashaik Maheboob Khan. Historian and musicologist. He studied at the University of Leiden. He is a key figure in the Sufi Movement as a leader and personal guide. Mahmood has great knowledge of Islam, Hinduism and  traditional Indian Sufism. He is th espiritual leader of a group of Turkish Sufi’s from Mannheim Germany since the mid-eighties. During the eighties he was the ‘Inayat’ (later renamed as Sahaba el Safa) of the Healing Activity of the Movement in a period where the ISM and SOI tried to merge. When this attempt eventually failed he became a member of the Leaderschip Council of the Sufi Movement, which consisted further of: Hidayat Inayat-Khan, Karimbakhsh Witteveen en Shazadi Musharaff Khan. This council was abolished when Hidayat became Pir-o-Murshid of the Movement in 1993. His social carrier lasted from 1969 tot 1987. Subsequently he was a employee of the Pakistan embassy and civil servant at the ministry of Foreign Affairs within the departement of Development. Two children were born in his first marriage to Nurzadu Vodegel: Safiye (1959) and Aulia (1958). In his second marriage to Najema Lier three children were born: Siddiq (1971), Enwer (1972) and Nuweira (1977). To secure the legacy of his father (Shaikh-al-Mashaik Maheboob Khan) and his uncle (Murshid Ali Khan) he founded the Maheboob Khan Foundation. Mahmood has lived his entire life at Hendriklaan 25, where meetings and lectures are regularly being held. 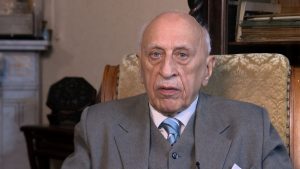 Fazal is the eldest son of Hidayat Inayat-Khan and Leny Flentge and a grandson of Hazrat Inayat Khan. He was the leader of the Sufi Movement from 1967 to 1982. He was the successor of Murshid Musharaff Moulamia Khan. After his leadership the Movement was temporarily led by a joint ‘Leadershipcouncil’ that consisted of Karimbakhsh Witteveen, Shazadi Musharaff Khan, Hidayat Inayat-Khan en Mahmood Khan Youskine. He created his own organisation in 1985 called The Sufi Way, which had its headquarters in Surrey, England called ‘The Four Winds’.

Fazal was the founder of the Sufi Way in 1985. He published several books on Sufism : ‘Modern Sufism’ and ‘Old thinking, new thinking’.

Eldest son of Pir Vilayat and Jemila Taj Inayat. Current leader of the Sufi Order International. For a long time he lived with his wife and 2 children in New Lebanon, in the state of New York, in The Abode of the Message which is a community of which the plot of land and houses belonged to the Shakers Community until the fourties. In 2016 he renamed his order: ‘Inayati Order’.

Pir Zia lives with his wife Pirani Sartaj and children Rasulan and Ravanbakhsh in Richmond and travels frequently.